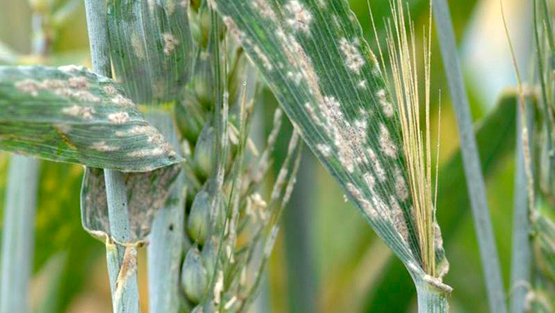 The worldwide distribution of one of the most important cereal pathogens is the result of human activity. Researchers at the University of Zurich have traced the history and spread of wheat powdery mildew along wheat trade routes and found that mixing of genetic ancestries of related powdery mildew species played a central role in the evolution and adaptation of the pathogen.

Wheat is one of the world’s most important staple foods – its significance for global food security was recently thrown into focus by the loss of grain exports from Ukraine due to the war. A more common threat to crops are fungal diseases, which can result in economic losses and famine. One of the most destructive pathogens is powdery mildew, a fungus which drastically reduces crop yields.

To prevent infestation, huge sums are currently invested in the breeding of mildew-resistant grain varieties. In order to infect the crop plant, the pathogen must be an optimal match for its host – with resistant varieties, the fungus cannot attack. But powdery mildew constantly and rapidly adapts to new hosts. To be able to keep the disease under control in the long term, it is vital that scientists gain a better understanding of the pathogen. This is where historical data is crucial: powdery mildew is as old as wheat itself, but until now, it was not known how it had been able to spread worldwide on different grains.

A research team led by Thomas Wicker and Beat Keller of the University Research Priority Program (URPP) Evolution in Action at the University of Zurich has now managed to uncover the secret of the wheat mildew’s success.